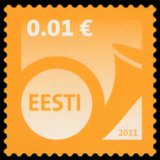 One of the stamps issued on January, 3

18/01/2011 - At the stroke of midnight on December 31, Estonia joined the European countries that have Euros as their currency. Post Office that, in the last years issued stamps with denominations in two currencies, have soon adapted.
On January 3, the first set of stamps with denomination only in Euros was issued.
The set is not really new, because the Posthorn set has been in use since 2008, but now there are no double currencies.

Even though the Estonia Post 2011 Stamp Issue Program does not include further releases of this set, new
denominations could be issued during the next few months, as it often happens with new definitive sets.

Our newsletter will keep you up-to-date with the latest changes to our site. Join us. It's free!